The Emperor card in tarot readings is often associated with masculine energy. The Emperor is merely an expression of power and leadership. This is a caretaker, a guardian, a loved one who looks out for the safety and treatment of others.

While it may be commonly depicted by Kings or leaders of the past, The Emperor card is society’s revolutionaries and cultural icons. The best leaders answer to the people and cannot succeed without them. So, what does this card mean in your tarot reading? The Emperor card reveals a position of respect and power. Are you lacking a sense of authority over your own life? This card can also point at another actor who has too much overpowering energy in your life.

This isn’t necessarily a bad energy or someone with ill intent; it could simply be an overbearing parent, inhibiting a child’s growth.

The Emperor card may also appear in a tarot reading when it is time to take the lead in your work or studies. It is a card that calls for mastery and honing of your skills or knowledge. When you focus your energy on a passion or new skill set, people take notice.

Remember, professionalism, by definition, is a skill level that is expected from others. Expertise is achieved when you exceed those expectations. This energy represented by The Emperor sends a clear message about what you need to do to succeed in business and academia.

You must move past your own mental obstacles in order to cash-in on your own potential. It is time to create, get organized, and lead by example. The Emperor represents both the end goal of complete confidence and mastery of your job as well as the journey itself, through hard work and courage.

You don’t have to embark on a completely new journey to achieve success. Starting small with just working your way up in your current career or getting noticed by more successful positions is enough to get the wheels turning.

The Emperor in Love and Relationships

The Emperor is not one without frustration in relationships. This is a tarot card that requires stability and clear goals to build confidence. If you are looking for love, then this card is telling you to move with intent and take initiative.

If you are currently in a relationship and are looking for answers during a difficult time, The Emperor card asks for commitment to long-term goals. Both parties must be upfront and honest, The Emperor does not allow for passivity or biting of the tongue.

It may seem turbulent right now, but seeing this card in a tarot reading is a good indicator that things will soon come to a head. Whatever the next step is in your relationship, it will return power to you.

The Emperor card warns you of your own health and well-being. Don’t adopt a sacrificial lifestyle to prove to the world you work hard. The old saying of “work smarter, not harder” applies perfectly to The Emperor and a healthy lifestyle.

Think about how your spiritual, mental, and physical health are connected to each other. If you neglect one, it affects the other. We may try to hide our mental health and spiritual neglect, but it eventually shows up in our relationships in some form.

Take this as an opportunity to meditate and strengthen your spiritual bond. The more grounded you are, the better you are prepared to take on whatever challenges you face in life. Self-confidence is The Emperor’s greatest weapon.

What Does The Emperor Reversed Mean?

Typically, you will encounter this card pulled upside-down when there is a power imbalance. If you or someone you know has an issue with control, this is the time to address that. Don’t brush it off or it will eventually come to a head and cause a fracture in the relationship.

The Emperor card presents an opportunity to take back control of your life and cast away insecurities. If you are feeling powerless or unable to find stability in your life, this card wants you to look inside to find your truth. When power is equitable, you are able to both conserve and share it.

In the workplace, this means not allowing your bosses to walk all over you. At the same time, you must also try to support your coworkers and lead when the opportunity presents itself. This card in reverse could mean a lack of experience needed to find your voice.

Start by drawing up a plan, getting organized, and checking off your list of life goals. Don’t force the people around you to listen. Actions always speak louder than words!

Yes or No / One Card Tarot Pull

Consider the Emperor card an emphatic “yes!” when asking a simple yes or no question. This is your sign to take initiative and resist the temptation to hesitate about what you are passionate about.

The Emperor in tarot readings for quick messages of guidance is all about trust and applying what you know to where you are trying to go. This means having a plan, a purpose, and a path to travel. Go forth and remember to protect your energy as a leader.

The Emperor Pairings and Combinations

When paired with other cards in a reading, think of The Emperor as the conductor putting the train into motion. This card enhances whatever energy it is paired with, but some pairings may seem like a bitter pill to swallow.

The Emperor and Strength

Fire energy permeates through both of these cards. An Emperor is strong by the very nature of their position. Strength’s pairing is your reminder that you must focus your own power on a constructive craft or goal.

By taking control of your own strength, you protect yourself from exploitation or so-called “energy vampires”. It may not show up as an obvious negative relationship, but your strength can be sapped away over time. The Emperor is one who is observant, not simply judgmental.

When you dedicate yourself to setting boundaries and valuing your strength, your life path gets clearer and your momentum increases.

Lastly, this pairing may also point towards finding a leadership source, be it from a mentor, investor, or partnership on the horizon. An important relationship requires you to be secure with yourself and to tactful, as an Emperor must be.

The Emperor and The Chariot

Another combination that appears to speak for itself, The Emperor’s leadership combined with The Chariot’s driver calls for perseverance and personal fortitude. In general, this pairing wants you to recognize the balance between selfish means and selfless actions.

The opportunities that will lead you closer to your goals may only materialize when you are challenged in social settings. Sure, you can put your head down and grind through grueling hours of studying, building a business, and so forth. But, slowing down and switching gears every once in a while does not mean you will lose the race.

The Chariot demands a great leader in The Emperor. Sometimes that Chariot is someone who needs help from you now, which can create a ripple effect that comes back and blesses you in the future.

The Emperor and The Empress

Receiving advice from two parents is akin to seeing this paring show up. The Emperor and The Empress represent a balancing of emotions. If you feel torn between two relationships, you’ll want to practice patience and tolerance.

This combination may also indicate that you need to approach your leadership roles with a softer touch. Although you may have plenty of qualification and experience, your delivery may rub others the wrong way. Combativeness may delay your success, so strike a balance between filtering yourself and asserting your leadership.

The Empress isn’t here to dull your energy, rather it channels it to a more effective instrument. You will know when you have hit that perfect marriage of the two royals when anxiety subsides and you no longer hesitate with your decision-making.

The Emperor Relationship With Aries♈

The Emperor and Aries form a complimentary bond of confident and commanding energy. The planet Mars rules Aries, who is the God of War. Naturally, The Emperor is seen as the leader or Commander in Chief.

With great power comes great responsibility, so Aries signs can learn a lot from The Emperor card. Remember to remain confident in who you are, but igniting the flame of arrogance.

An Aries sign who is insecure in their own power will often overcompensate and “perform” as a leader, but lack the same respect and impact as a leader who is grounded and is not afraid of humility. Maintain a personal connection with those under your leadership and your flame will never fizzle out.

Back to blog
★ Judge.me Reviews

Let customers speak for us

I’m in awe and cannot believe the author was able to bring THIS to life. The cards are ancestral…magical…they command respect. The wisdom and perspective is what has me so amazed. The artwork is regal!!!! Absolutely stunning! I already know this will be passed down. The best deck I’ve ever owned. Thank You!

The energy and the imagery go hand in hand with this deck. This deck has depth that only a wandering, curious and yearning soul can understand. This was a Christmas gift to myself and I am so grateful for this gift. The gift to communicate with the realm of the soul.

These products are all gorgeous. The art is even more arresting in person, and the details show the love of the Black Diaspora and care for our traditions that Courtney took in creating the art. The notebooks are very high quality. The paper is creamy and stands up to even very inky pens without bleeding. I even had an issue with ordering, and Courtney was so sweet and accommodating. I cannot recommend her work more highly. If you’re thinking about making a purchase, do it! 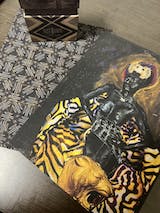 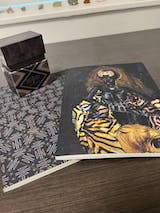 I purchased a travel size tarot deck for my older sister. When she opened it on Christmas, I was blown away by the artwork and the overall quality. I went with a smaller size for the cost savings and portability, but considering the sheer beauty and durability, it feels like an absolute steal. You can sense how much sweat and love went into its creation. My sister has used the deck during her therapy sessions and both she and her therapist agree it’s one of the most powerful decks they have encountered. Truly a one-of-a-kind piece.